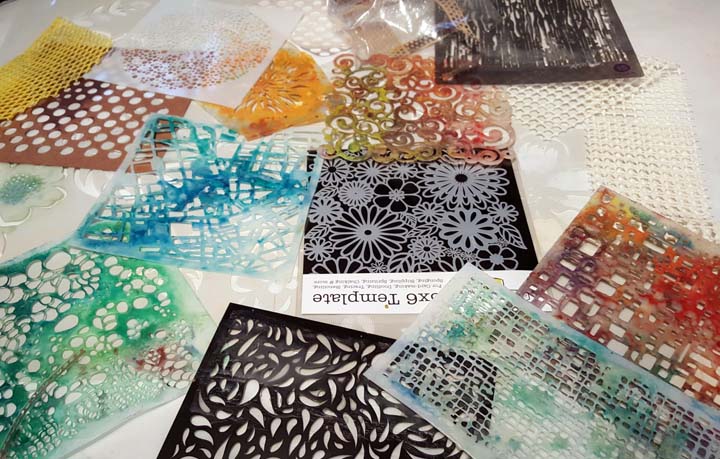 We are just back from a road trip to Texas (next time I’m taking my palette and some wax with me, two weeks is just too long to be out of the studio) where I bought a couple of new stencils at Jerry’s Artarama in Austin. For me, encaustic is often about textures and I have accumulated a surprising number of stencils in a short time.

Finding stencils: all art and craft stores carry stencils, so do paint stores but stencils for wax need to be heavier than some of the thin stencils you’ll see for sale.  My go-to place is Wax Works West, they carry Stencil Girl and The Crafters Workshop stencils, both of which stand up to rough treatment. Of course, stencils don’t have to be purchased, they can be anything that calls to you, such as pieces like the yellow mesh in the upper left corner of the picture above or one of my favorites, the backing off of some plastic bumpers I used on the back of my frames.

Using stencils: sometimes stencils are the first thing on my support, pushing me into a direction from the beginning.  If you use alcohol inks or watercolor and are working on a white support you can apply those after the wax goes down to provide additional background interest. For the two pieces below, I used one of my new stencils only after several earlier steps including 8 layers of wax.

Warming the wax just a little helps keep the stencil in place, and sometimes I add pastel thru the stencil, lightly fuse into the wax and then I add a layer of wax before removing the stencil and fusing once more. Adding color again after the stencil has been removed creates some depth and allows color variation. As a final step on the pieces below, I used metallic foil which loves the rough stencil surfaces.

Care of your stencils: Mini Cosmic Bubbles was the stencil I used in the two pieces shown here.  I used both pastel and wax and did some light fusing in place so now the stencil has an accumulation of both wax and color.  To clean up I can place the stencil on my heated palette for a few seconds and wipe it pretty clean with a paper towel; or after several uses – sometimes it is nice to have the wax from an earlier piece meld into the current piece – you might carefully scrape off the wax accumulation to create shapes of tinted wax. 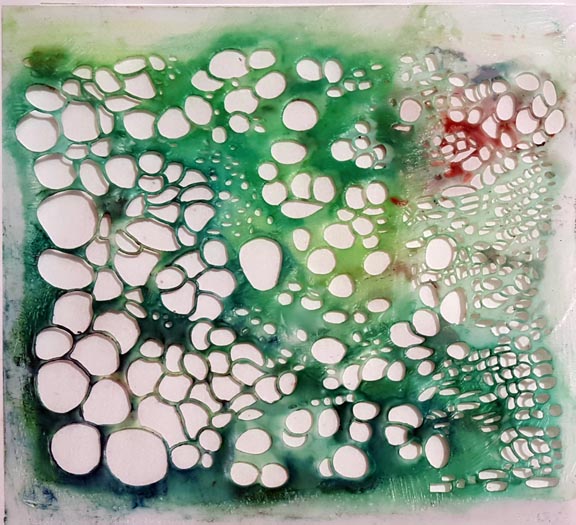